As the nation clocks back in after the UK Mayday bank holiday, a small band of fifty-something artsy types are heading in to work with their heads spinning with rediscovered memories, friendships resumed, and a strange feeling that someone just ‘switched us off and switched us back on again’ and the last three decades are re-booting on the flickering green amstrad of our dusty middle aged minds.

For this weekend marked the thirty year reunion of the graduation classes 1982, 83 and 84, of the Manchester University Drama Department.

Of course, it was wonderful to see old friends, and even to see people to whom one hadn’t been particularly close, to share stories, anecdotes, long hidden secrets, wonderful news of the the intervening three decades – relationships, careers, children – and to put that formative time into some kind of context. 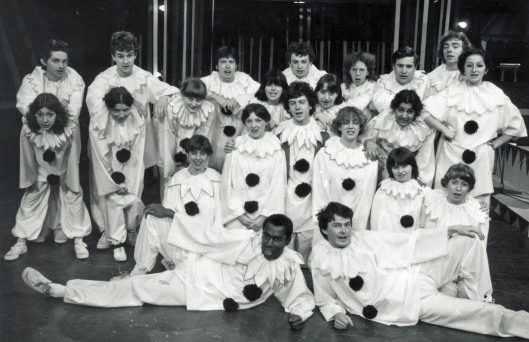 When Tony Johnson (now a highly regarded teacher) addressed the gathering in the bar of Contact Theatre (now majorly refurbished since the days of Richard Williams’s actually rather exciting repertory company – by today’s standards), one of the first things he said was ‘sorry’ – and there was an almost unconscious, but cathartic murmur of recognition.  For my part, I’d started dreaming about this reunion about a month ago, because mingled with the visceral excitement of digging out old photographs of the shows I’d directed and acted in, and cassette tapes of the songs I’d written, came some toe curling memories too; of mistakes made, petty jealousies, pointless rivalries, obsessional love affairs (bordering on the dysfunctional) and general bad behaviour.

But in that moment – that ‘sorry’, that murmur – also came the realisation that there was no point apologising for, or punishing, or actually feeling any kind of regret for the mistakes of one’s 19 year old self.  Because, cliched though it may sound, that’s what mistakes are for.  And as Tony said, at 19, he felt out of place, frightened, excited, fucked up – and the great joy of getting older is that you realise that everyone else was as frightened, excited and fucked up as you were.  It was that maelstrom of post teenage angst and ambition that made us what we are.

Tony Johnson: ‘We were all fucked up’.

Of course this is true for all generations; we didn’t invent growing up, and we see our own kids, or young relatives, going through many of the same things.  But there was something about our experience that was absolutely unique to that time, and that has something to say about the state of university education today. A lot of people spoke on Sunday about the loose form the degree took, whereby one could mix and match how much of the course one actually engaged in, as long as you traded it for creativity in other areas.  So in my own three years at Manchester, I skipped an awful lot of lectures, and busked an awful lot of essays and tutorials, but I wasn’t just getting stoned, I was also out with the rest of the gang writing, directing, acting, composing, lighting for dozens of shows.  When I got back from the reunion I tried to count them up… I reckon I did about thirty in the three years I was there.  I work with students today who boast that they’ve done three shows in a year.  Maybe ten in their whole university career.

The creative jewel in Manchester Drama Department’s raggedy paper crown was Monday night studio group, whereby the very basic Stephen Joseph studio was at the exclusive beck and call of the drama students, to put on any kind of drama events we wanted.  Many were terrible, some were great, but they were all ambitious… it was our playground.  It was the root of everything I do today. 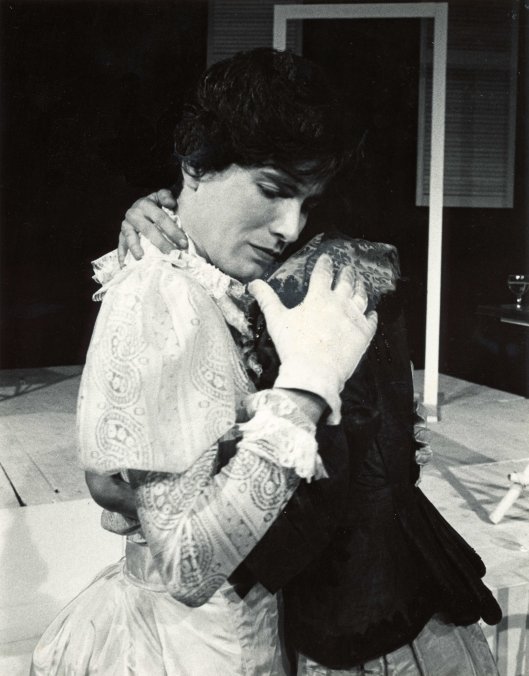 Richard Sandells in Cloud Nine (and in a dress)

Imagine trying to sell the idea of such a ‘playground’ to an academic establishment today?  How could such a shambolic approach possibly be justified?  After all, the students are paying £9000 per year, plus borrowing through the nose just to live.  There are targets, modules, highly regulated contact time (academics, please supply your own jargon here)…. and how can you justify a performance space that doesn’t have at least some commercial income stream… not to mention health and safety.  And even if you did provide some kind of fantastic romper room for creative students, they couldn’t actually use it because any time they’re not studying, they’re working in bars til two in the morning trying to support themselves. And weekends aren’t available to rehearse (as I discovered recently directing at The Arden theatre School) because everyone’s working in retail.

Of course, in our salad days (strictly iceberg lettuce, you understand – rocket hadn’t been invented) there were no tuition fees, and there were also full maintenance grants, and, get this, in the holidays you could claim housing benefit if you didn’t go home.  These days – if such a thing were possible, which it isn’t – you would be labeled a student scrounger.  Why should students get ANYTHING?  After all, having a degree will add tens of thousands of pounds to a young person’s annual earning capacity.

Thank you for that, Tony Blair, you war mongering philistine twat.

How sad that that era has been demonised in the public consciousness as ill disciplined, liberal failure.

The truth is, for a few extra grand from the tax payer (which I have repaid many times over since then) I worked (and played) harder than I have ever done in my whole life.  It was a system that produced hundreds of wonderful theatre and arts practitioners, and Manchester alone can boast from that period Ben Elton, Rik Mayall, Adrian Edmonson, Actor Paul Bradley, BBC Radio comedy supremo Caroline Raphael, Theatre Director Lawrence Boswell, Actress and writer Meera Syal, director Polly Teale, Trevor & Simon, Comedian Tony Hawks (although he only stayed for a few weeks), Arts Producer Rachel Clare, Doon Mackichen, an assistant to Doctor Who (Sophie Aldred), music journalist and writer Nick Coleman, playwright Charlotte Keatley, James’s front man Tim Booth, and many, many, many more… teachers, drama practitioners, poets, producers, film makers, therapists, lighting designers, costume supervisors… and ME!!!

Me telling one of my contemporaries to ‘oh sit down’!

Of course, I’m not saying that today’s crop of students won’t produce many significant players – they will – but I do know – because I work with them – that today’s graduates emerge from university with far less hands on experience, far less ability for guerrilla problem solving, with even more left to learn than we did.  They’re paying a small fortune, and getting less for it.  The Blair government pursued an entirely reductive argument that the bit of paper that says ‘BA Hons’ is somehow the point of going to university.

It isn’t.  It’s the very least important thing – especially if you are pursuing a highly lucrative, tax earning, exchequer boosting career in the arts.

They really don’t write ’em like that any more…

The most important thing to do at university, is just that…. ‘do’.

And god bless our lecturers and tutors from thirty years back – Viv Gardner, Nick Roddick, David Mayer, George Taylor, Tony Jackson, Ken Richards, Wylie Longmore and all the rest – for just letting get on with it, teaching us some stuff, and giving us a prod in the right direction when we needed it, and every now and again, letting us fail….  and all of it on the taxpayer’s tab.

Because believe it or not, the taxpayer has been the net beneficiary. 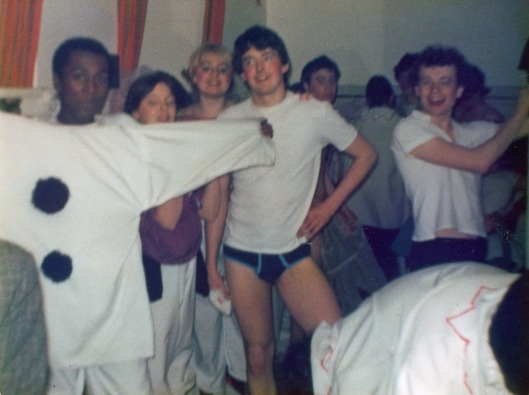 (check out what my old housemate, Jacqueline Saphra has to say about it in her lovely blog…)

My good friend and experienced blogger, Ming Ho, advised me, when I started this blog a couple of weeks ago, to stay on topic…. ‘Living With Prostate Cancer’ or ‘TV Writing’ or ‘NinjaMarmoset, Media Commentator’.   But whatever you do, she said, don’t flit around, blogs like that never work. Ehm, sorry Ming, you’re probably right, but today, it’s politics time.

My justification for it is that I have long been fascinated by Tony Blair and once wrote a play about him for Radio 4 called Can You Tell Me The Name Of The Prime Minister?. As part of my research for this, I managed to wangle myself a ticket to see him testify at the Chilcott Enquiry into the UK’s involvement in the Iraq War, back in 2010 (FOUR whole years ago, and still no published report!!). It was an electric experience on a damp February afternoon in London… at which the former PM batted his pathetic interrogators away with charmingly earnest, yet simultaneously arrogant, self aggrandising ease.   He was brighter than the lot of them put together, and I was on the edge of my seat, desperate to shout out a few decent questions, and to berate the committee for being so easily waylaid by his lawyers’ diversionary tactics.  I didn’t say anything however.  All spectators were sworn to silence, and there were armed security there to enforce the rule.

Fast forward four and a bit years and yesterday Tony Blair delivered the following speech about his take on the West’s response to Islamic Extremism in the Middle East. 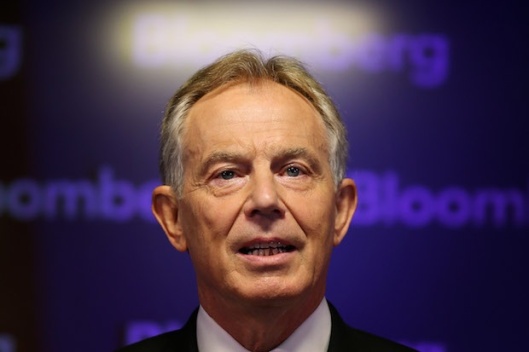 I doubt that many, if any, passing blog visitors will have time to read the speech in full (I only do because I’m laid out in the closing stages of a course of radiotherapy – see Ming, I’m back on topic!!) but the text of Tony Blair’s speech about the Middle East and Islamic Extremism, and his prescription for the West’s role in it, is well worth close scrutiny. It is actually quite an extraordinary document. For a start, there’s much to agree with, some informed analysis, some frank speaking about things that need to be said.

It is also mind bogglingly self deceiving and self aggrandising. It is a manifesto that cries out in Old Testament fashion: ‘Behold ye minions, the dam is about to crack and we shall all be drowned!!! Heed my words!! Stay and fight!!’ whilst forgetting to mention that he was part of the guerrilla raid that put a ton of TNT under the whole thing in the first place.

And whilst in one paragraph he continues his increasingly lonely assertion that history will treat the invasions of Iraq and Afghanistan favourably (I wonder why???), he then goes on to state that it is in the West’s interests to support the murderous regime of President Assad in Syria.

Go figure, if you can.

Rarely has a document made me nod in agreement and gawp in heart pumping, smacked-gob incredulity almost simultaneously. There are important issues being discussed here, but, having read the whole thing, I find myself seeing not the haunted, careworn Bambi we’ve all grown to groan at whenever he appears on our TV screens, but the confused, bloated, mumbling form of Brando’s Colonel Kurtz in Apocalypse Now trying to rationalise the bloody chaos over which he presides.

I feel as if I’ve learned little about the Middle East and a lot about Tony Blair’s fucked up Heart of Darkness.

(I’ll be back talking about soap writing and telly next time, promise!)