For anyone who, perhaps, still doesn’t get quite why there is a specific problem with Jeremy Corbyn’s relationship to anti-semitism and quite why it’s problematic, I think this video clip – which I chanced upon in my researches – illuminates the nuances and consequences of his behaviour very well. 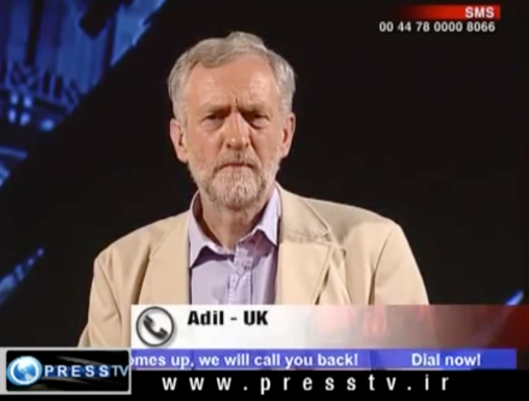 Press TV is an Iranian backed news network affiliated to IRIB, The Islamic Republic of Iran Broadcasting. There’s no reason why Jezzer shouldn’t have appeared on that network if he wanted to and he doesn’t say anything anti semitic whatsoever.

The caller’s complaint is that the BBC is supposed to be objective, but continually invites ‘Zionist liars’ onto its news programmes and ‘never corrects them, never ever’.

Again this is an opinion from a caller to an Iranian TV station – albeit factually incorrect – and on its own, weeeeell it’s on the borders of antisemitism… Is it okay to talk about Zionists critically? Sure. But when you mix that with the implication that the BBC is colluding with ‘Zionist liars’… well suddenly we’re into Zionist media conspiracy territory, which is often code for notions of Jewish conspiracy. It certainly trades on that well worn trope.

No, it isn’t. It’s factually incorrect.

Unless Jeremy has a mind set that thinks: ‘Hmmm… yes, actually the BBC does have a pro Zionist agenda…’ which then puts him into playing along with those tired old tropes of Jewish conspiracy.

Jezzer and his apologists might say: ‘Be fair… he’s presenting on Iranian backed TV. He’s hardly going to tell a caller that they might be wrong about the BBC colluding with Zionist liars. So, basically he’s just being polite, like not trying to start a family row when racist granddad starts up during Christmas dinner.’ On its own, maybe that’s a fair excuse.

But then he ‘didn’t look at the Mear One mural properly… and was just making a general point about freedom of expression’ (which is odd because a couple of years earlier he spoke out publicly against the Danish cartoons. Apparently freedom of expression didn’t apply in that context.). And then there are all the dodgy FB groups he’s signed up to. ‘Well you know how it is, you just get signed up to these things and you don’t really pay full attention…’ Oh yes, then there are his ‘friends’ in Hamas. He’s just being polite again in the name of dialogue.

Sorry peeps – but it won’t fly.

This is a pattern. At best – being as generous as I can muster – it’s about having a tin ear to anti-semitism and the subtle ways it can manifest, which works differently from actually saying explicitly Jew hating, racist things.

However, I do think it’s worse than that. On a conscious level I’m prepared to believe he is utterly genuine when he talks about opposing anti semitism and being militant against racism. The trouble is, he doesn’t appear to understand what anti-semitism is, or how it works. He doesn’t apply the same standards to his own behaviour that he would, say, with regard to skin colour racism, sexism, homophobia or disability prejudice. Most of us in this modern liberal world of ours, accept that we can all manifest traits and tropes from ingrained or institutionalised prejudice. I know I still question my own attitudes in all sorts of situations, which is tough for me (!) because I love a bit of political incorrectness!

The one person you can’t trust is the person who declares that they are somehow immune of these very human foibles concerning difference.

When Chris Mullin spends the day  on Twitter saying ‘Jeremy doesn’t have a racist bone in his body’ my immediate reaction is – yes he does – even if it’s one of those tiny tiny tiny bones in the inner ear… especially if it’s one of the tiny ones in his ear! Small though they are, they are somewhat crucial in how we perceive the world.

Mullin in full paranoid ‘goysplaining’ mode here as he causally negates any claims of anti-semitism dismissing them as Jewish Leaders ‘ganging up’ … Ganging up..? Oh that’ll be those bloody conspiring Jews again, will it Chris?

As for clunking, sadly Jeremy does it more than most as this pattern demonstrates.

So, yes, this is about Jeremy, and it is about his leadership. I’ve seen more anti semitism on FB and Twitter in the last couple of years than I’ve encountered in my lifetime. And pretty much all of it from the left. Well obviously my social media feed is self selecting – because I am of the left. So I’m aware that it has become amplified, and right wing anti-semitism has become less visible to me – but that doesn’t make left wing anti semitism ok. It’s not a competition.

It’s clear to me that Corbyn’s tenure has made these views – sometimes expressed very subtly – far more acceptable for those who want to find a home for them in the left.

Here are some tips for Jeremy and his team: If you don’t want to be considered anti-semitic don’t endorse the viewpoints of people who imagine a Zionist conspiracy at the BBC; don’t call Hamas your friends; don’t casually ‘fail to see’ eye poppingly anti semitic murals; don’t sign up to anti semitic FB groups; and take a long look at your public profile.

You can SAY you’re opposed to anti semitism all you like, but it’s hard to find the public appearances and actions and engagement with the Jewish community that actually prove that to be the case. It’s rather easy to find actions that suggest the opposite.
Jeremy Corbyn is the leader. He can blame ‘pockets’ all he likes… but I would argue they take their cue from him. He gives them permission.

He nods and says: ‘Good point’.