I blame the vaccinations.

I’m 59 and a few weeks shy of a trip to Madagascar to see the lemurs (before the whole island is logged to destruction) the practice nurse advised me not only to renew my typhoid immunity but to have an MMR booster.

Cue eighteen hours of slightly trippy wooziness not to mention two extremely sore upper arms. So that was any creative work out of the window. Unable to sleep – because every time I rolled over the pain woke me up – I rolled, instead, down to the tram and headed into Central Manchester to wooze in front of a movie at the city’s premier arthouse cinema, Home.

What to see in the dog days of August? I’m not sure if it’s me, or the exodus of creative talent from traditional movie making to long form TV drama, but I often struggle to find films that really attract me these days. Summer is particularly barren… there aren’t even any blockbusters I want to see. Squinting at the programme on offer I opt for Danish indie movie, Holiday – written and directed by Isabella Eklöf whose screenplay for the dark-as-dark-can-be realist Troll drama, Border, so haunted me last year. I’ve vaguely skim read a couple of reviews of Holiday (i.e. looked at the star ratings) and seem to remember that critics have quite liked it. So in I go.

Ok. I need to be up front about this. I didn’t make it to the end so I am not offering any kind of considered critique of the movie itself. No one can do that without watching the whole of something. To do so would be dishonest and wrong.

I blame the vaccinations. Or The Penis. Or perhaps a heady (!) combination of both.

Spoilers ahoy – stop here and come back after you’ve seen the movie if you’re intending to take the plunge!

What follows below is a bit spoilery but not too much as it’s hardly a movie that depends on plot surprises. I sensed that most of the other people in the cinema knew what was coming (so to speak). Basically it’s the story of Sascha (Victoria Carmen Sonne), who (in film terms) is a sort of gangster’s moll (yes, the movie – and I – would eschew such dated and sexist terminology, but in critical terms that’s the genre/movie iconography we’re dealing with here). She’s on ‘holiday’ in Bodrum, Turkey, with her drug gangster boyfriend, Michael who is a violent, jealous misogynist.

For the 70 minutes or so I watched, Sascha is navigating his controlling, simmering violent possessiveness. He owns her. He owns everyone. But especially her – and she is his to use and abuse (graphically) as he chooses. The question those first seventy minutes poses is how much is she prepared tolerate? Is his assumed ownership of her somehow to her advantage? Is she helpless or is she complicit? Will she exploit it at some point?  Will she fight back? 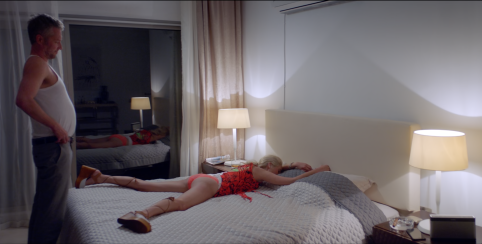 We get the point about Michael pretty quickly

As the holiday progresses she meets a friendly Dutch guy, Thomas, in an ice cream parlour and strikes up a more tender, if flirtatious (on both sides) relationship with him. Michael spots the connection between them and you know it’s not going to end well (although who knows, perhaps they all make up in the final reel and start a socialist commune in Aarhus. Like I say, I didn’t make it to the end.).

The whole thing is photographed at an unsettling and icy distance. The Turkish sunlight is bright and glaring – but never warm. We are never allowed to engage with Sascha – but we are invited to look at her, almost askance, to scrutinise her behaviour, and to judge her.

Then there’s… The Scene.

I should have read the reviews more closely.

About fifty minutes in Michael has just beaten up one of his lackeys for messing up some drug deal or other, and he’s tense and angry, and so naturally he can only let off steam by vaginally, and orally raping Sascha and then ejaculating in her face.

It’s played out in real time, in a continuous wide shot, in all its full frontal priapic and jizz-spurting glory.

Eugh. I’m literally hiding behind my iPad, thanking my lucky stars this isn’t a 4DX screening where they shake you around in your seat and spray your face with droplets!

I’ve seen some explicit movies in my time but this is just HORRIBLE.

Which I guess is the point. Although then I’m thinking… WHAT point exactly? My mind is racing.

I already know that rape is a terrible, terrifying, violent act. Do I need to see it? Does this actress really have to simulate abuse in this way to evoke this disgust in me? Hang on…. Is she simulating it? That purple greasy bell-end – moistened by Michael’s spit – looks pretty real to me – as does the glob of cum hitting her directly in the eye. (NB I am using this explicit language deliberately in order to express the graphic quality of the movie itself). So… what? Is the actress this guy’s partner in real life? What was the audition like? Even if she has consented to this, isn’t it still, effectively, abuse?

For sure, when the BBFC certificate came up at the beginning it did say ‘scenes of graphic sexual violence’ but I didn’t expect it to be this graphic. I look around and suddenly notice that the rest of the cinema is almost exclusively male. Men on their own. There are just two women in the screening. Did these guys know something I didn’t? Are they getting off on it? This is a foreign language ‘art’ movie, but what we’re seeing is the commonplace of a lot of pornography. A woman being horribly raped and the man firing off semen in her face. It is often said that the distinction between pornography and art is context, but any sense of context has completely gone now. Maybe I’m over thinking it – but my brain is now unable to watch or absorb the film as I try to decode what I’ve seen. But hey – ! – if I didn’t stop to think about it – if I didn’t worry about not just the story but the execution of the act for our entertainment – surely that would make me some kind of psychopath.

I hang on for another fifteen or twenty minutes… until the sexual violence starts up again and then I’ve had enough. 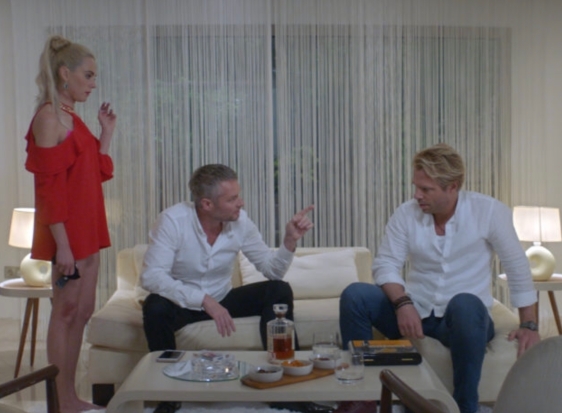 This scene may well have ended with an innocent game of Twister but I’m afraid I didn’t stay to find out.

I’m hopeful that this film, written and directed by a woman, has some intelligent point to make, and all will make sense eventually, but in my newly vaccinated state I can’t help but think that there is no point to be made (of which I wasn’t already aware) that would make this onscreen sexual brutality worthwhile. But then I think, I’m staying with this purely because it’s by a woman director – a Danish woman director – and therefore it must somehow be inherently ok – it’s ART for God’s sake! – but if this exact same story with these exact same shots came from the camera of, say, Michael Bay, I doubt very much that Home would be screening it.

I’m off – as are another two audience members (including 50% of the female contingent).

The other thing I learn is that it was a prosthetic penis after all.

I would say that I found that hard to get my head around – but I won’t as it sounds like a truly terrible and somewhat confused double entendre.

Ok, so it’s a fake cock. Does that make it better? It looked so real to me I assumed it was as real as the penises in Baise-Moi or Stranger By The Lake (which were the genuine article, complete with steaming ball-fresh semen). So if I am fooled by the member’s seeming verité then surely I HAVE to worry about use of a degrading sexual act not just as a narrative device but as something done to an actress on a movie set for a piece of paid entertainment. On the other hand, if I know in advance that it’s a rubber prosthetic, then it’s fundamentally trivial. It’s only pretend and it’s all about the artifice, and I’m no longer really concerned about the character. I’m just wondering how they got the jizz to fly out so convincingly, and ‘wow that still must have hurt when he stuck it down her throat’. Imagine having to fill out the risk assessment on that!

It now does precisely what devalued screen violence does. Whilst you might be alarmed by watching someone getting punched or slashed in a movie, you know it’s all fake so it’s rarely affecting. Unless of course you are either a) gullible or b) excited by the simulation of violence for the sake of entertainment. Indeed, I have (purposefully) adopted a fairly flip tone in this blog as to some of the things depicted in Holiday – serious issues of course – but I can, because now I know it didn’t really happen. It was just rubber and maybe a bit of CGI. The artifice invites me to stand my seriousness down.

Like I say, I am offering no judgement as to Holiday as a movie – I didn’t see how it resolved which I sincerely hope was in a worthy/intriguing/challenging way – all I can comment on is the stuff I saw, but I know I wasn’t alone in being driven from the cinema… and if that happens then surely the movie has failed.
Who is it for?
Does Eklöf want me to stay or to leave?
And if I do either of those, what does it say about me?
Assuming I do hang around, what is it trying to say and to whom?
Most fundamentally of all, does that thing need saying, does it need saying in that way, and if so, why?

There are also wider questions about art and cinema here. Do we need the dangerous moments in cinema to be obviously fake – or does this reveal something problematic with the self importance of film drama – a fundamental flaw/confusion in its aspirations to realism? If something looks real should we assume it isn’t – is that a healthy assumption or just an abdication of responsibility? If we do know it’s fake – or discover the fakery after the event – does that make it any less problematic?

I stagger home, and crash out, hoping to sleep off the worst of my vaccination, comforted by the thought that in a few weeks I’ll be in Madagascar and I won’t have to worry about such questions… 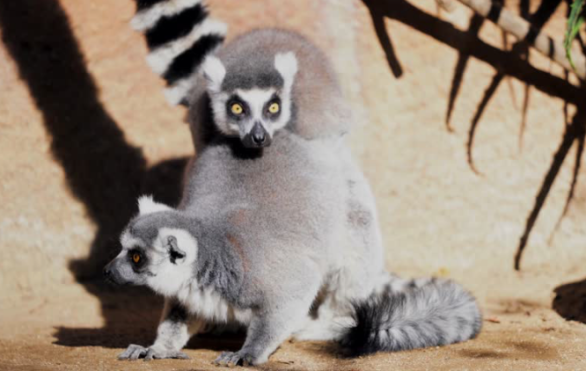